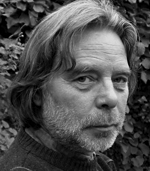 Enk De Kramer contributed for a greater part to the art of etching and this not only in Flanders, even the Japanese are interested in his work.

Graphic artists are not the most revered ones in the contemporary art scene. Since long De Kramer broke with the functional basic principle of graphics as would it be a method of reproduction, making the result to become a ‘print’. The term ‘print’ would originally mean (from the old French “preinte”) something in the sense of ‘state of being printed’. Soon the word ‘print’ obtained a negative connotation, as it was linked to this so-called fundamental attempt of multiplication. Now a childish direction (exchanging pictures), then in a somehow waggish sphere of the antiquarian (the Print Room), sometimes in the more frivolous sense ( the ‘feminatheek’ of Louis Paul Boon).

Walter Benjamin put this problematic nature into words in a philosophical treaty: “Het Kunstwerk in het Tijdperk van Technische Reproduceerbaarheid’ (‘The Art-Piece in an Era of Technical Reproduction Possibilities’). In this treaty he puts forward that the unique value of the authentical piece of art has its foundation in the ritual, during which it obtained its original and first useful value. This ritual, first belonging to a magic and later to a religious cult, continues its existence as a secularised ritual within the most profane forms of the beauty cult of contemporary art. Benjamin fears - unjustly as far as I am concerned - that the fact that the aura of an art-piece is reproducible (linked to its uniqueness) will get lost.

As said before, Enk De Kramer developed another notion of graphic art. He restored the ritual aspect of it. Indeed, Enk De Kramer left etching as contribution to the printing art for what it was. In exchange he contributed through his gravures to the deep reflection on the implication of being-a-form of things. As early as he produced prints, he always kept the number of prints moderately low. Usually there were only five or occasionally ten prints, whereas producing a new series was absolutely taboo. Moreover he applied coloured variations which made that each print was still a bit different.

From 1983 onwards, his figurative period vanishes visibly, together with the title which henceforward becomes ‘without title’. After the pop-art themes with plenty of irony, after the woman as exuberant ornament and after the banquets, a feminine corpus appears in which sculptural voluminous aspects become important, together with the vesture conditions in which textile as pictural texture deserves all attention. Colours disappear and become values of gray. Black appears to be multiple in its shades. Thus seventy fragments of women appear as a result of a game with several platecombinations. Yet, the numeration becomes 1/1, meaning each piece is an “original one”. Done with the possibility of being reproducible. Woman disappears as theme. In the beginning there are still some traces of textile basic elements. Soon clothing as sign is replaced by signs as fructifiable bearers of meanings. No clear signals, rather experimental trying out what it means to be “form” and “colour”, i.e. the system of art itself. Such as a figure needs a form to make a signification arise, so can a form give sense to informal figures, resulting in an endless game of secundary significations.

Since some time now, De Kramer does not show us his small spirited figures anymore, he rather creates abstract cosmoses in which it is nice to remain: coloured sound boards for sentiments; sensitivity-landscapes for inner matters; trains of thoughts; though through labyrinths or at the attics and in the basements of our unconscious being. One can speak of some more figurative expression in more recent work (see photographs). The boat motive is a kind of point of departure for the pictural journey (De Kramer “paints” as it were with etching plates). However do not expect the marines. It seems more to be some criss-cross shadows of an imaginary ship, the boat of life and death.

Technically - not speaking of etching, as expertise in this matter needs not to be praised - this procedure means to De Kramer a step by step search for his own creative power. Each unique print is a part of a plastic thinking process about a motive. Not before all possibilities are explored - typical for the De Kramer-metonymy - another motive is tapped. The whole of such an experiment makes a series, variations on a form-theme. In this sense, Enk De Krames perfectly fits into the contemporary serial-thinking, which protests against the old convincement that the being of things really does exist. The varied repetition of one creates the other. Here, printing art offers pictural possibilities as no other does, due to the fact that the factor of repetition lies in the etching plate itself enabling very controled variations, the so-called different “states”.

As De Kramer replaced the “possibility of being reproducible” of graphic art by the principle of “possibility of repeating”, he made Benjamin’s concern superfluous. His etches are rituals of the serial work within the cult of an unusual beauty, as Benjamin wanted it to be: all aura. 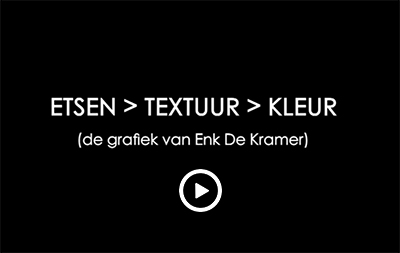 In the studio of the artist Enk de Kramer